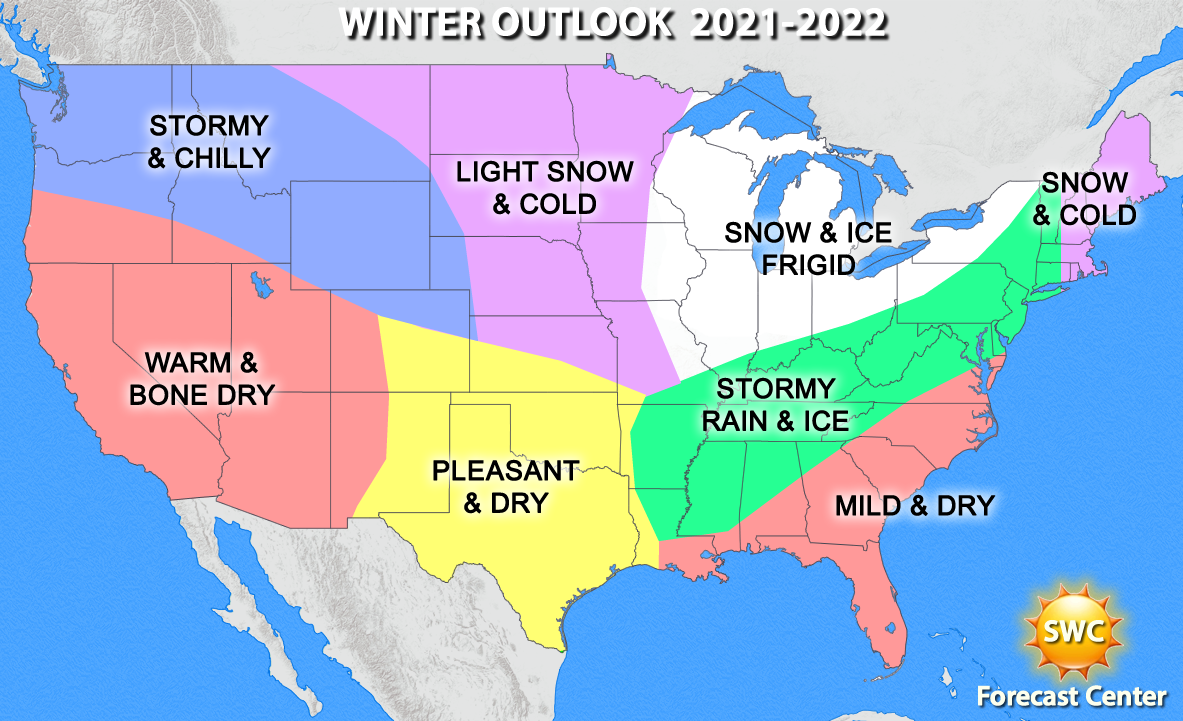 U.S. Winter Outlook December 2021 - March 2022
❄ After countless hours of studying key winter signals and past analog charts, a Winter Outlook for 2021-2022 is rendered! We will not bore you with all the signals and meanings, rather we will bring you a concise summary of what should occur for the months of December, January, February. We will touch on the months of November and March as well.

We are in a second year La Niña. While the La Niña signal waned for a period from late winter through the middle of summer 2021, it came back to life in July and has carried suit through middle October. Usually, depending on strength, La Niña can flood most of the United States with mild, Pacific air, and wet conditions across the Midwest and Great Lakes regions. However, when this episode is weak to moderate, and other atmospheric teleconnections are prominent, this can be curbed as colder, drier air from Canada spills into the U.S. Now let's dive right into the details! 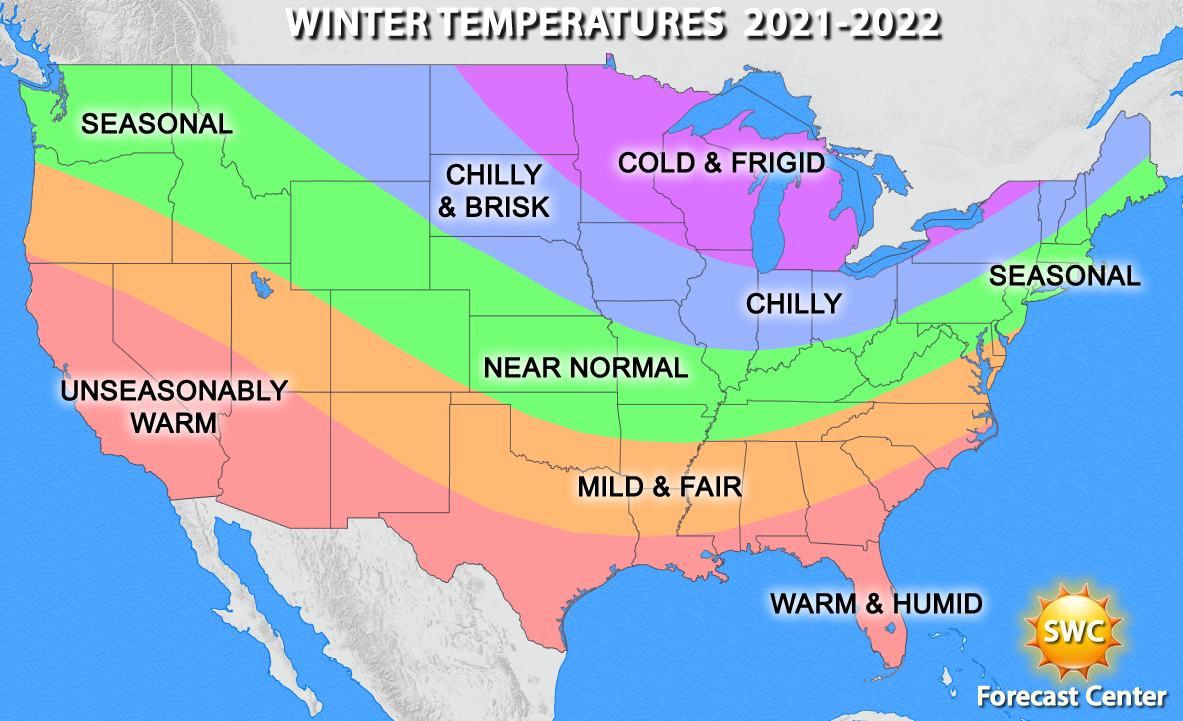 U.S. Temperature Departure December 2021 - March 2022
🌡 Above normal temperatures will reign supreme for much of California into the western Rockies thanks to the tendency of ridging to remain semi-permanent. We are seeing a strong blocking signal in and around the Baffin Bay/Davis Straits region and coupled with warm Atlantic Ocean waters, above normal temperatures are likely for much of the mid Atlantic states up to the coastal areas of New England. This translates southward through the Carolinas, Florida, and the Dixieland states.

Another feature that will be pivotal to track this Winter is the Gulf of Alaska low, which could aid in pulling down cold air from Siberia, up over the North Pole, and then southward into the United States. This leads to the idea of colder than normal temperatures for the interior of Washington into parts of Big Sky Country, the northern High Plains, upper Midwest, Great Lakes, parts of the Ohio Valley, and interior New England.

As you can see, the combination of a modestly robust sub-tropical jet, usually associated with El Niño episodes, curbs the idea of a runaway La Niña pattern, so the battleground of warm versus cold leads to a rather normal temperature regime in between. We caution one of thinking that normal means tranquil. It is with high certainty that some wild swings both on the cold side and warm side will occur which will lend itself to a near normal temperature profile for this winter. 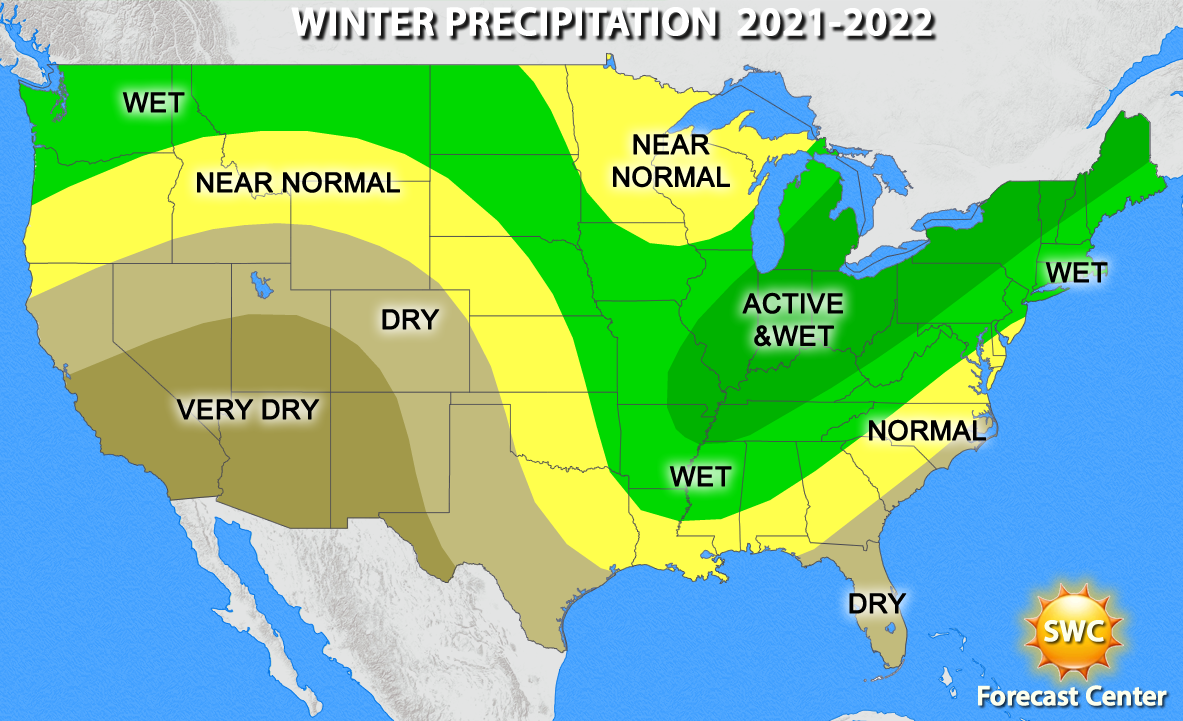 U.S. Precipitation Departure December 2021 - March 2022
🌧 Precipitation often correlates with temperature. Where the most active weather lies, we often find above normal precipitation. The warm and dry versus the cool and wet idea will hold true for the upcoming winter.

High pressure should lead to dry conditions across the majority of the western United States. The energetic sub-tropical jet should lead to an axis of above normal precipitation along the Gulf Coast up into the Mississippi River Valley. With a strong mean flow of the Polar and Arctic jets, a corridor of above normal precipitation can be found from the High Plains into the western Lakes, Ohio Valley, and interior New England.

Where the sub-tropical, Polar, and Arctic jets work in tandem this winter, the potential exists for an enhanced area of precipitation, including frequent snow and ice! 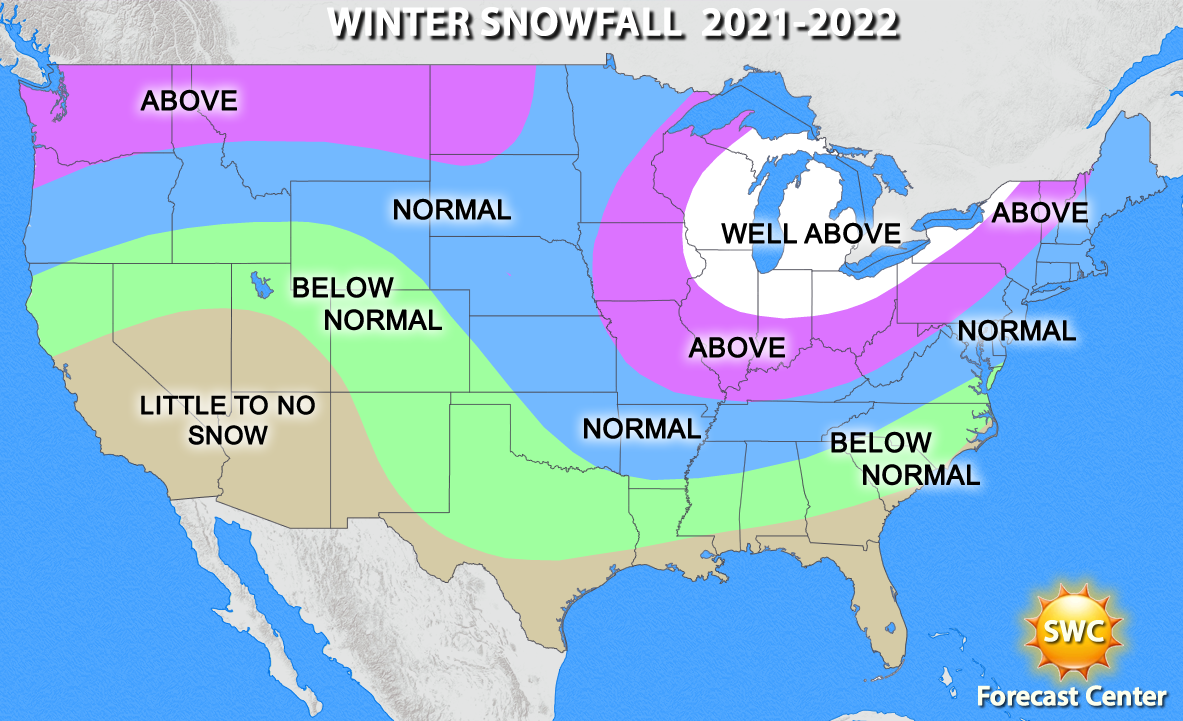 U.S. Snowfall Departure December 2021 - March 2022
❄ Depending on the depth of cold air, snowfall could be plentiful for some and scarce for others. If the Polar Vortex decides to split and reside in the Western Hemisphere, powerful Arctic shots could visit the United States from time to time. If the lobe sits over Siberia, then the cold waves will be more fleeting and less intense. Blocking features will also need to be watched. Should strong stratospheric warming episodes be a common feature, then substantial blocking will occur enhancing the likelihood for Arctic outbreaks to occur. This all in turn, will dictate the amount of snow possible.

On the flip side, due to the tendency of ridging, many areas in the West should be below normal for snowfall. The margin for error, at this time, is high due to uncertainty of placement of the Polar Vortex and the strength of high latitude blocking.

Coastal New England and the Northeast will be a battleground. With warm waters, coastal areas could remain below normal for snowfall while areas inland receive plentiful snowfall. We believe enough cold air will be around at times that many areas average close to normal. 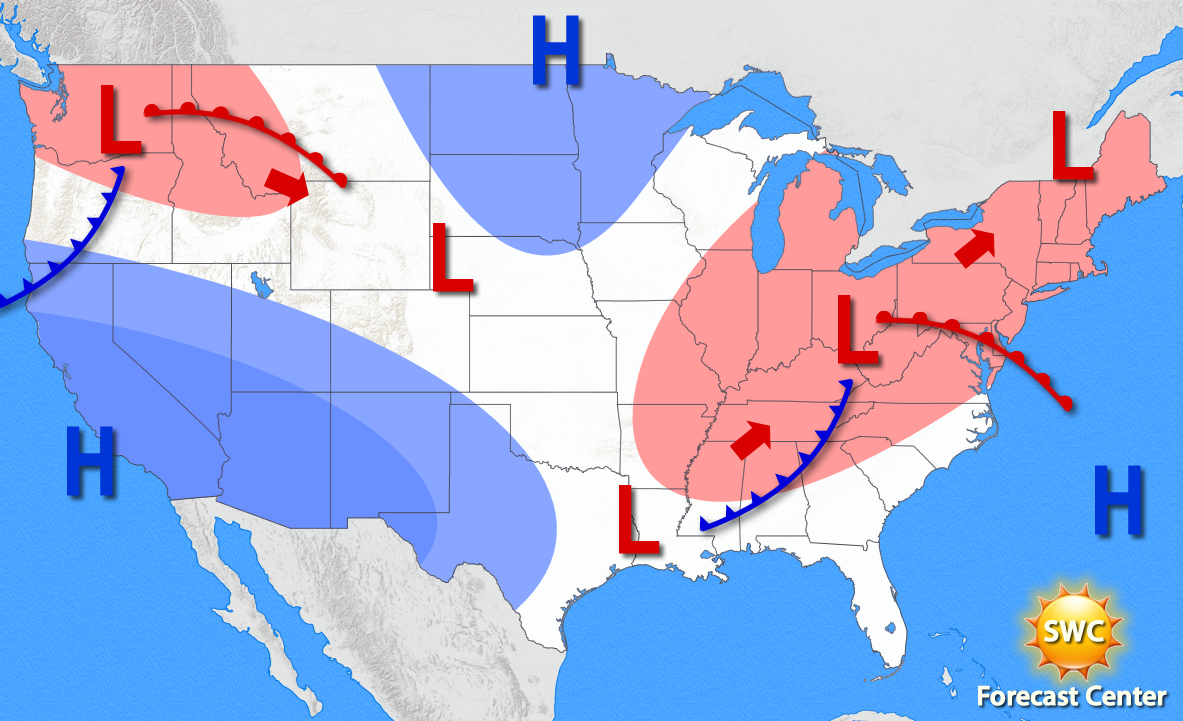 Pressure Tendencies and Low Positions for Winter 2021-2022
🌤 As in any forecast, a prediction is based on several factors that help shape an idea at the time it is issued. As of the middle October, our research has led to what has been stated. Weather is a constant chaotic phenomenon. We realize should current observations and factors change, this will affect the forecast thinking we have stated. Should we realize these changes, we would have to alter our ideas. With that being said, here is a brief recap of the winte

Generally warmer and drier conditions are expected over the western United States. With the persistence of the Gulf of Alaska low, the far northern Pacific Northwest should be wetter and cooler than average. This below average trend will carry into the northern High Plains, and through the Midwest and Great Lakes. Precipitation should be above average as well, reflecting the cooler idea.

Moving eastward, the immediate East Coast through parts of the Mid Atlantic, Carolinas, Southeast, and Gulf Coast states should be above average in temperatures. Thanks to a robust sub-tropical jet stream, most of these areas should tend to be above average in precipitation.

Snowfall ideas run below normal for the Southern California mountains, southern Rockies, southern Plains, into the Southeast. Yes, we realize snowfall in parts of these areas is little to none, so a “snow free” winter looks likely in some of these areas, especially in the lower elevations.

The Cascades, far northern Rockies into Canada, northern High Plains, northern Midwest, Great Lakes, northern Ohio Valley, and the interior Northeast and New England should have above normal snowfall by the middle of February. The wild card will be the coastal Northeast and Mid-Atlantic. Should a coastal low or two develop and strengthen with an Arctic air mass in place, one or two storms could produce yearly snowfall averages in one or two storms.

To conclude, the Winter 2021-2022 season appears to be volatile and should strong stratospheric warming lead to substantial blocking signatures, a colder look looms. Also, should the Polar Vortex develop out of the persistent Gulf of Alaska low and reside on this side of the North Pole, Arctic outbreaks could be longer and more intense. These are two main features to watch over the next 6 to 10 weeks.

Let's sit back and strap in for the Winter Season ahead!